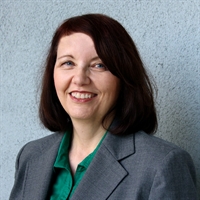 Sybil Johnson’s love affair with reading began in kindergarten with “The Three Little Pigs.” Visits to the library introduced her to Encyclopedia Brown, Mrs. Piggle-Wiggle and a host of other characters. Fast forward to college where she continued reading while studying Computer Science. After twenty years in the computer industry, Sybil decided to try her hand at writing mysteries. Her short fiction has appeared in Mysterical-E and Spinetingler Magazine among others. Originally from the Pacific Northwest, she now lives in Southern California where she enjoys tole painting, studying ancient languages and spending time with friends and family.

Sybil Johnson grew up in the Pacific Northwest. Frequent trips to the library introduced her to the Land of Oz, Mrs. Piggle-Wiggle, Bilbo Baggins and a whole lot more. She fell in love with mysteries reading Encyclopedia Brown and Nancy Drew. In junior high, she discovered Agatha Christie.

After high school graduation, Sybil moved south to attend the University of Southern California, majoring in Computer Science. After twenty years of designing and writing code and managing programmers and software development projects, she turned to a life of crime writing.

A past president of Sisters in Crime/Los Angeles, Sybil co-chaired the 2011 California Crime Writers Conference. She also served as We Love Libraries Coordinator for SinC National. In her spare time, she enjoys tole painting, studying ancient languages (Ancient Egyptian and Coptic are her current areas of interest), and spending time with friends and family.